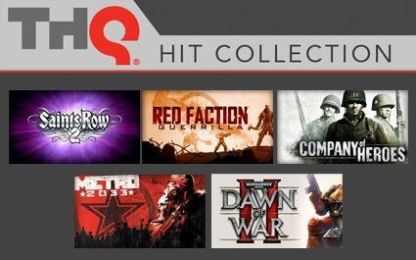 Oldies but goodies. Warhammer® 40,000™: Dawn of War® II beskrivelse Developed by award winning Relic Entertainment, Dawn of War II ushers in a new chapter in the acclaimed RTS series - taking players to the brutal frontlines of war to lead an Elite Strike Force on ...

Developed by award winning Relic Entertainment, Dawn of War II ushers in a new chapter in the acclaimed RTS series - taking players to the brutal frontlines of war to lead an Elite Strike Force on a mission to save the galaxy.
With a focus on fast-action RTS gameplay, Dawn of War II brings to life the science fiction universe of Warhammer 40,000 like never before. Experience the intimate brutality of battle as you play through the epic campaign. Clash with enemies on battlefields ablaze with visceral hand-to-hand and ranged combat. Lead and develop your squads into the most battle hardened elite strike force in the Galaxy.

Saints Row 2 brings true freedom to open-world gaming. Players can play as who they want, how they want, and with whomever they want in this sequel to the much acclaimed and tremendously successful Saints Row.
Set years after the original, the player finds himself in a Stilwater both familiar and strange and challenged with bringing the Saints back as the rightful kings of Stilwater and bringing vengeance to those who wronged him.

Delivering a visceral WWII gaming experience, Company of Heroes redefines real time strategy gaming by bringing the sacrifice of heroic soldiers, war-ravaged environments, and dynamic battlefields to life. Beginning with the D-Day Invasion of Normandy, players lead squads of Allied soldiers into battle against the German war machine through some of the most pivotal battles of WWII. Through a rich single player campaign, players experience the cinematic intensity and bravery of ordinary soldiers thrust into extraordinary events.

Set 50 years after the climactic events of the original Red Faction, Red Faction: Guerrilla allows players to take the role of an insurgent fighter with the newly re-established Red Faction movement as they battle for liberation from the oppressive Earth Defense Force. Red Faction: Guerrilla re-defines the limits of destruction-based game-play with a huge open-world, fast-paced guerrilla-style combat, and true physics-based destruction.

Set in the shattered subway of a post apocalyptic Moscow, Metro 2033 is a story of intensive underground survival where the fate of mankind rests in your hands.

In 2013 the world was devastated by an apocalyptic event, annihilating almost all mankind and turning the earth’s surface into a poisonous wasteland. A handful of survivors took refuge in the depths of the Moscow underground, and human civilization entered a new Dark Age.

The year is 2033. An entire generation has been born and raised underground, and their besieged Metro Station-Cities struggle for survival, with each other, and the mutant horrors that await outside.

You are Artyom, born in the last days before the fire, but raised Underground. Having never ventured beyond your Metro Station-City limits, one fateful event sparks a desperate mission to the heart of the Metro system, to warn the remnants of mankind of a terrible impending threat. Your journey takes you from the forgotten catacombs beneath the subway to the desolate wastelands above, where your actions will determine the fate of mankind.